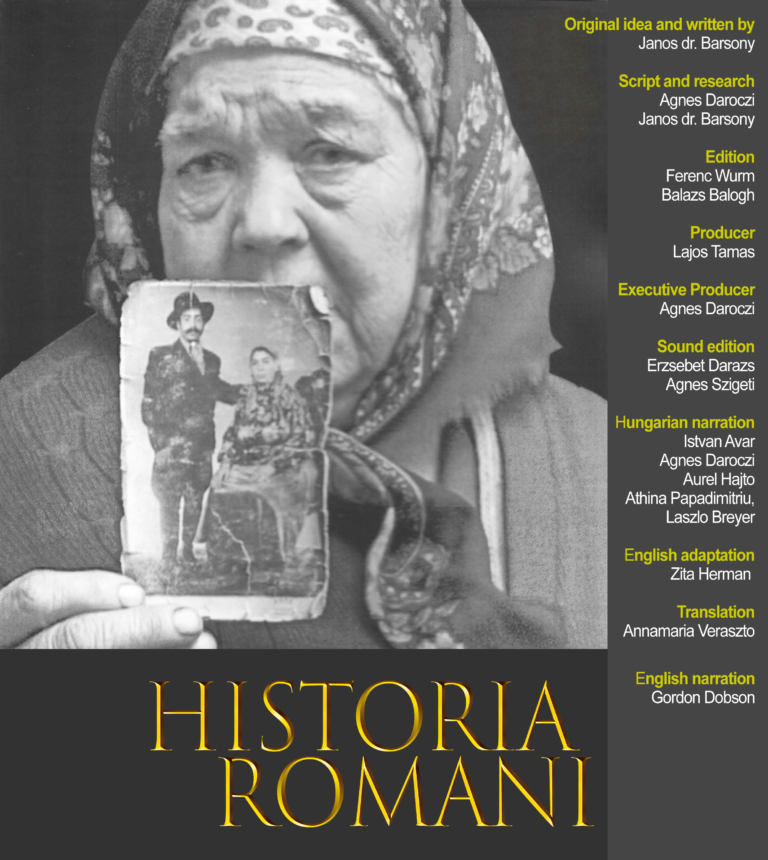 based on the research work of Agnes Daroczi and Janos Barsony

The Historia Romani is a short informational documentary series produced by the Romedia Foundation between 1999 and 2004. Based on the centuries of research work by Agnes Daroczi and Janos Barsony researchers, who are also authors of the film series. The fifth episode of the Historia Romani series focuses on the history of the Romani people in the first half of the 20th century in the Carpathian basin and beyond told from a Romani point of view. Historical narrative features the measures taken against Romani communities: namely the Romani policy of the bourgeois states, but also covers outstanding Romani artists and politicians. The participation of the Romani people in the First World War, the changes of the Romani policy of the Soviet Union, the socio-Darwinist and later racist approach of certain sciences of the era and then their dominance as a political viewpoint in the Nazi empire. The processes of the Romani Holocaust in Germany and its retainer states. The short documentary shows how the lives of the Hungarian Romani community changed at the beginning of the century, and then during the First World War and in the Horthy era in Hungary. The respective state laws touched upon Romani lives and everydays some still influence our life today. The story covers the fate of the Romani people during the Second World War and the history and ideological and cultural processes that led to the Romani Holocaust, the Pharrajimos in Hungary.

Ágnes Daróczi is the founder of Romédia Foundation. She was born in  Berettyóújfalu, Hajdu-Bihar County. She is a journalist, editor-presenter and a public educator, creator and an author of various books and documentary films. She organized the countrywide exhibition of Romani visual artists, which was a novelty during socialism. She was the founder and editor of the first Romani television program  The Patrin running weekly 27 minute shows in the Hungarian Television (1992-1998). She organized the first and second Roma days in the history of Hungarian Television. Daroczi also works as an ethnologist, cultural manager and as an artist. Daroczi is the filmmaker behind the films Historia Romani documentary series (1999-2005) and the Memento in music -Requiem for Auschwitz (2015). She is a human rights activist, who fights for the social justice and the acceptance of Romani people and recognition of Romani culture in Europe and beyond. She is also the author behind various books and publications including Pharrajimos: The fate of Roma during the Holocaust (2005) and Kali Trash (2015). Her activity and efforts were rewarded with many awards and international honors.

Janos Barsony is a minority rights expert and a researcher focusing on the history of Romani communities. Active member of the Romani rights movement from the 1970-80’s founder of various music groups and art collectives including: Romano Glaso, Kalyi Jag, Monszun. Before the democratic transition in Hungary contributed to the founding of Romano Kher and actively engaged in anti-ghettoization and Romani settlement development initiatives. Barsony was a member of various organizations after the political system changed including the Phralipe, Amalipe, Romani Human Right Foundation, Budapest that he led as Director of legal operations until 2004. Member of the  Budapest City Council and various minority initiatives. Author of various books including Pharrajimos (2002) the fate of Roma during the Holocaust that has been translated into various languages. Kali Trash (2015) and Vrana Mami Tells a Fairy (2000) and Romani Fairy Tales by Mora Publishing House (2007). Due to the vast amount of research and analysis of Hungarian Archive databases involved in the realization of various documentary films including Historia Romani.

Vice President of the German Bundestag

Chairman of the Council of German Sinti and Roma in Hesse