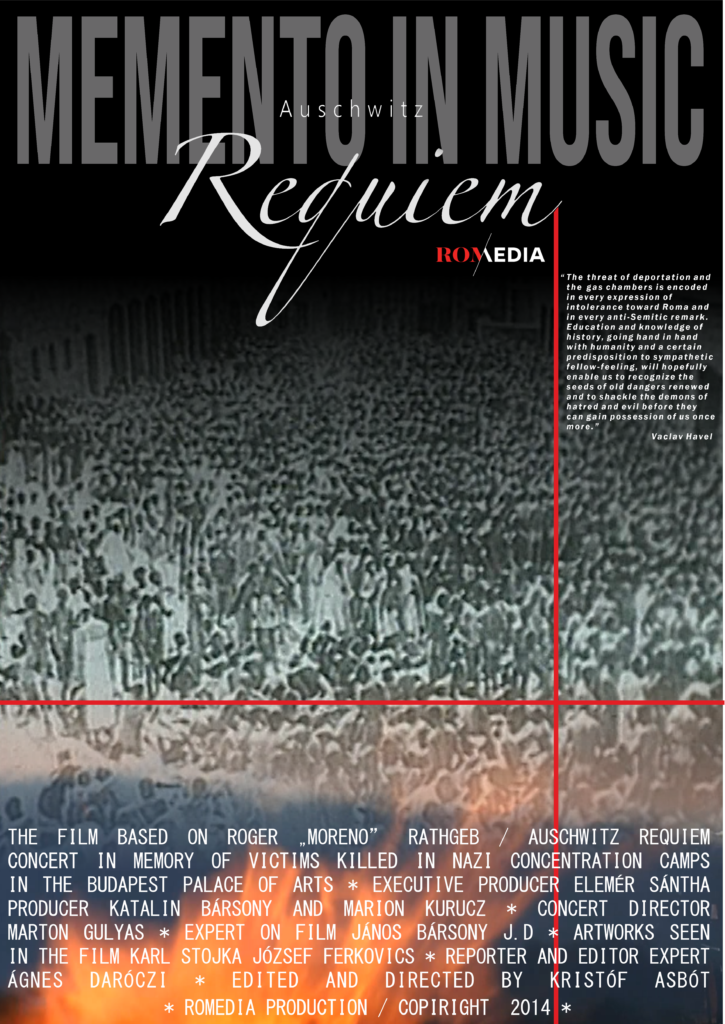 “The threat of deportation and the gas chambers is encoded in every expression of intolerance toward Roma and in every anti-Semitic remark. Education and knowledge of history, going hand in hand with humanity and a certain predisposition to sympathetic fellow-feeling, will hopefully enable us to recognize the seeds of old dangers renewed and to shackle the demons of hatred and evil before they can gain possession of us once more.” Vaclav Havel

Auschwitz Requiem is a memento to the sufferings of Romani and Sinti communities during the Second World War. The film reconstructs the history of Romani and Sinti victims, using archival footage and visual art works to tell stories that have never been deemed worthy of inclusion in the official history and often remain silenced. The film’s musical composition is based on the classic Catholic liturgy and was recorded by the Roma and Sinti Philharmonic Orchestra of Frankfurt am Main and written by the autodidact Dutch-Sinti composer Roger Moreno Rathgeb. The film uses visual, musical and narrative elements to describe the unimaginable and bring alive the silenced history of Romani suffering. Archival footage documents the horror of the Romani experience during the Nazi era. The musical depth of the Requiem was inspired by Rathgeb’s visit to Auschwitz Birkenau. Listening to the melody of the Requiem, hearing the survival testimonies, and seeing artworks of Jozsef Ferkovics and Karl Stojka, who themselves came from survivor backgrounds, can help the Roma community deal with the hardest and most sensitive topics of our past.

Ágnes Daróczi is the founder of Romédia Foundation. She was born in Berettyóújfalu, Hajdu-Bihar County. She is a journalist, editor-presenter and a public educator, creator and an author of various books and documentary films. She organized the countrywide exhibition of Romani visual artists, which was a novelty during socialism. She was the founder and editor of the first Romani television program The Patrin running weekly 27 minute shows in the Hungarian Television (1992-1998). She organized the first and second Roma days in the history of Hungarian Television. Daroczi also works as an ethnologist, cultural manager and as an artist. Daroczi is the filmmaker behind the films Historia Romani documentary series (1999-2005) and the Memento in music -Requiem for Auschwitz (2015) She is a human rights activist, who fights for the social justice and the acceptance of Romani people and recognition of Romani culture in Europe and beyond. She is also the author behind various books and publications including Pharrajimos: The fate of Roma during the Holocaust (2005) and Kali Trash(2015). Her activity and efforts were rewarded with many awards and international honors.

Kristof Asbot directed more than 200 live TV shows, mini-series, documentaries and magazines about minority and environmental affairs, music and game-shows, most of them are award winning non-fiction works. In the past decades Mr. Asbot created dozens of stage- exhibition- event- and shop design projects based on his own design elements. In the 1990s He was an employee of the Hungarian Public TV and worked there for more than 15 years. He is the founder and creative partner of VMC and Medialog Ltd. both Hungarian companies. Mr. Asbot has been teaching for more than 10 years as a university lecturer. His specialization includes TV communication, video journalism, stage design, identity design. Recently Mr. Asbot spent time living in Norway during the time he was working for the Opera Nordfjord as a stage designer and filmmaker. At the moment working as a lecturer at Budapest Metropolitan University and a freelance interior designer, and media expert and filmmaker at the Budapest Architectural Center – FUGA Gallery. Mr. Asbot is also a curator and member of the board of Romedia Foundation and the director of the film Memento in Music – Auschwitz Requiem (2014).